Mr. Gorbachev: Tear down this Wall!

Posted by Trainphilos on 9 November 2019 in History |No Comments

A now famous line from then US President Reagan’s 1987 speech at the Brandenburg Gate in Berlin, West Germany.

30 years ago today, on the 9th of November 1989 the Berlin Wall did indeed come down and changed global politics. I grew up in West Germany and very much remember waking up the morning of the 13th of August 1961 to the news that the “Western” part (the US, French and British sectors) had been walled off from the rest of the country. Unfortunately that was just the beginning of yet another sad chapter in Germany’s history. Eventually the Soviet Union, through it’s vassal state the “German Democratic Republic”, walled and fenced off the whole of the Soviet occupied German area.

A very brief historical background: In 1961 the relationship between the East and West blocs was at an all time low. Berlin had been divided into four sections, one for each of the victorious World War II powers, in accordance with the Potsdam Agreement. The largest, mostly eastern section of the city fell to the Soviet Union. As the end of the Second World War neared, the Allied Powers, particularly the USA and the Soviet Union, really pushed towards Berlin in order to get to the city first and be able to occupy the city: it would be a huge psychological and strategic victory for whoever entered the city first. Unfortunately the Americans, for a variety of reasons, did not make it to Berlin in time, leaving that to the Russians. Now all of Berlin found itself squarely in the middle of the Soviet occupied area.

The thick, black line on the bottom map was the “Innerdeutsche Grenze”, a fortified border deviding Germany into two entities. The western part, consisting of the US, French and British zones, was eventually to become the Bundesrepublik Deutschland (Federal Republic of Germany) aligned with the West. The Soviet sector became the Deutsche Demokratische Republik (German Democratic Republic) allied and dependent on the Soviet bloc. Eventually the East Germans sealed off their section from the West Germans and began to fortify the border.

This, about 890 mile long “border”, was not just a simple border. It was a death strip! Generally a 35 feet wide plowed strip ran along a 8 feet tall double razor wire fence. Reportedly over 1 million mines were laid. Watch towers were built every so many kilometers. People were shot on sight. On the East German side citizens were not allowed to come with in 3 miles of the border.  And yet people attempted to flee the repressive regime. 790 died doing so.

All this came down starting 30 years ago today. Personally I thought it never would!

Was it a triumph of democracy over a repressive regime? Was it maybe the victory of Capitalism of Communism? Looking at what is happening around the world now, are we really better off nowadays? I let everyone decide for themselves.

Here are a few photographs I found in my files. If I remember correctly, I took those from a train going between Frankfurt and Hannover. At that time the rail line passed by the “border” very closely: 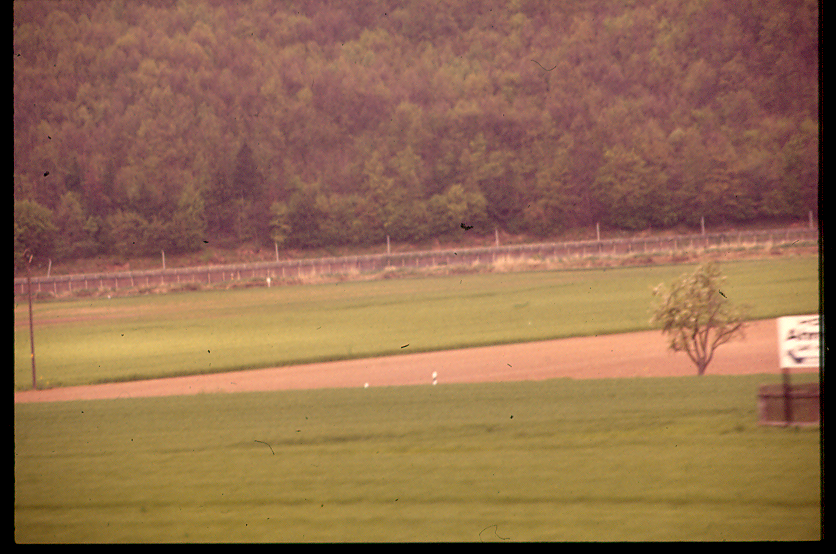 The “death strip” clearly visible in the top photo. That strip is full of anti personnel mines and self shooting apparatus.

The second photo shows the strip in the Harz mountains. A watch tower is barely visible on the top.

The Brandenburg Gate in Berlin seen from the West German side

A piece of the Berlin wall kept as a memorial.

Please feel free to leave a comment or reply. You do not need to enter your email address or web site. Cancel reply